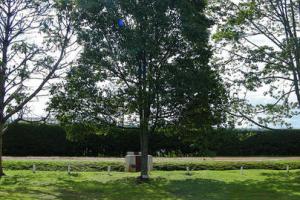 P. africana, commonly known as African cherry, is a medium to large evergreen tree found across montane forest regions of Africa. It can grow to 24m in height and has a blackish-brown bark. The species requires high light conditions and has a moderate growth rate. The species is planted as ornamental trees and is harvested for firewood, heavy construction, furniture, flooring, and other uses for its heavy and durable wood.

The main conservation concern for this species, however, is the harvesting of its bark, which is used in African and European medicine. While the tree is resilient to bark removal, poor harvesting practices of the bark leads to death of the tree. This has led to its IUCN Red List status classification as “vulnerable” and listing of the species on Appendix II of CITES. While the extent of threat to the survival of the species is contested, the CITES’ plant committee has expressed heightened concern over the declining population of the species in Burundi, Cameroon, the Democratic Republic of the Congo, Equatorial Guinea, Kenya, Madagascar, and Tanzania. This has led to the establishment of a P. Africana Working Group to provide guidance to those countries in improving implementation of CITES requirements for the species.

P. africana is listed on Appendix II of the Convention on International Trade of Endangered Species of Wild Fauna and Flora (CITES).