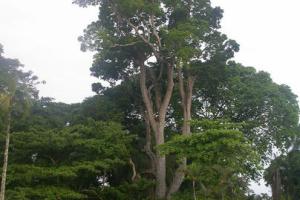 Khaya ivorensis is the most important tree species providing African mahogany. Like the other members of its genus, the species can grow to be large - 30 to 35 meters with trucks over 1 m in diameter. The bases of these trees are often buttressed. K. ivorensis prefers wet undisturbed evergreen forest and is traditionally used in dugout canoe construction in its natural range. Various parts of the tree are important in traditional medicine and soap making. The timber of Khaya ivorensis is very similar to that of the other five or six closely related Khaya species. The species is one of the most important for timber plantations, since the trees grow quickly and produce high-quality wood.

In natural forests, trees reach sexual maturity around age 30 but produce seed crops only every three to four years. It occurs in natural forests scattered or in small groups, generally in low density. This species is slow to regenerate. Its IUCN Red List status is “vulnerable.”

Khaya ivorensis is considered endangered by the IUCN.

The United States is one of the main buyers of Khaya timber.