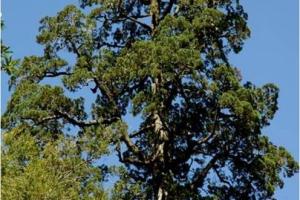 F. cupressoides is the only species of the genus Fitzroya, named by Charles Darwin for Captain Fitzroy of H.M.S. Beagle. It is a large conifer that has been logged very heavily for over 350 years. Its range has been reduced to less than 15 percent of its original area, located mostly in the remote and difficult to access high cordillera of the Andes.

Wood from the tree was widely used during the colonial period for roof shingles, furniture, and ship masts. The species produces moderately hard and heavy wood, dark red to reddish brown in color. Because of serious overexploitation, F. cupressoides is now rare. Chile has banned logging of the species since 1976, and it is listed on Appendix I of the Convention on International Trade in Endangered Species of Wild Fauna and Flora (CITES), the most restrictive listing which bans international trade of the species in most cases. F. cupressoides has a status of “endangered” on the IUCN Red List.

A logging ban in Chile has been in place since 1976. The CITES Appendix I listing applies to all parts and derivatives, including manufactured and finished products. Under normal circumstances, timber from this tree cannot be legally traded on international markets.

N/A due to CITES Appendix I listing.

“Fitzroya cupressoides” at the IUCN Red List of Endangered Species.