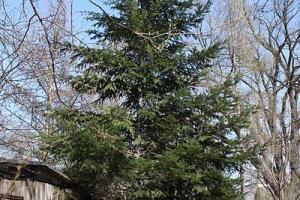 P. menziesii, commonly known as Douglas fir, is a coniferous evergreen species native to Canada, Mexico, and the United States. It is the most exploited timber species in North America and one of the most important timber species globally. It commonly grows to 250 feet in height and 6 feet in diameter and lives more than 500 years. It is an important species to its ecosystem, providing habitat and food for small mammals. Young fir trees are dark gray-brown and matured stands are thicker and reddish-brown. Douglas fir wood is used for construction, veneer, pulp, poles, plywood, decking, railroad ties, mine timbers, house logs, flooring, furniture, and pilings. It is also a popular as Christmas trees and landscaping trees. Its IUCN Red List status is “lower risk/least concern.”