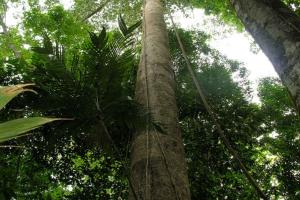 C. odorata is a very large tree - it can grow to 40-50 meters tall - native to large areas of the tropical Americas. The timber of large, mature trees is considered very valuable; in fact, C. odorata is one of the world’s most important commercial timber species. The wood of C. odorata timber is distinctive for its fragrance, and is best known as the wood commonly used in traditional cigar boxes. Its fragrant, insect-repelling properties have also made it a very popular choice for wardrobes, closets and other clothing-storage uses. Large-scale commercial exploitation of C. odorata over the last 200 years has placed significant pressure on the species in its natural range; its IUCN Red List status is “vulnerable.”

In its natural habitat, C. odorata occurs in both primary and secondary forest at altitudes up to about 1200 meters above sea level. C. odorata is grown widely on plantations throughout the tropics, including many African countries, and the timber from these planted trees has helped to some extent to alleviate pressure on C. odorata in natural forests.

H. courbaril is not listed on any appendix to the Convention on International Trade of Endangered Species of Wild Fauna and Flora (CITES). It has not been evaluated by the IUCN.

“Cedrela odorata” at the IUCN Red List of Endangered Species
Photo of Hymenaea courbaril from Reinaldo Aguilar on Flickr. Used under a Creat…