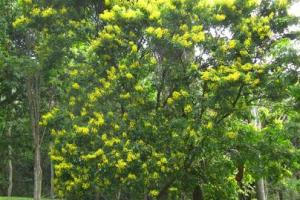 Caesalpinia echinata is native to Brazil and is credited for giving the country its name (early harvesters were called brasileiros). The tree produces a deep red dye that was highly prized during the period of early exploration of the New World. Use of the tree for this dye continued until the 1920s, by which time the population has declined significantly. The species is found in late-succession forests, making regeneration of the trees difficult.

C. echinata is a relatively small tree, growing to about 15 m tall. It is found mainly in Bahia, Pernambuco and Linareas reserves, but some are planted as ornamental or park trees. Today, pau brasil continues to be harvested and exported for use in production of high-quality stringed instrument bows. It is the undisputed choice of bowmakers and musicians, but continuing supplies are threatened because the tree has become so rare.

The species is listed on the Brazilian Institute of Environment and Renewable Natural Resources’ (IBAMA) list of threatened plants. Its IUCN Red List status is “endangered.” It is also listed on Appendix II of CITES.

C. echinata is listed on Appendix II of the Convention on International Trade of Endangered Species of Wild Fauna and Flora (CITES), a listing that applies to logs, sawn wood, and veneer sheets, including unfinished wood articles used for the fabrication of bows for stringed musical instruments. Brazil also restricts the logging and export of C. echinata under national law.

The U.S. and EU are major buyers of C. echinata.