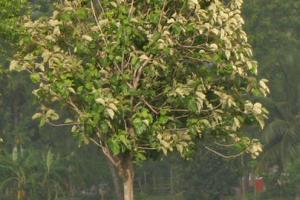 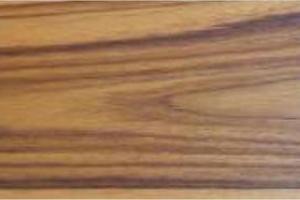 T. grandis, commonly known as teak, is a large deciduous tree native to India, Myanmar, Laos and Thailand. Teak is highly tolerant of a range of climate conditions and can be found from very dry to very moist regions. Teak is known as a high-quality timber species with high resistance to decay and insect damage, and the heartwood changes from olive green to golden brown after exposure. Indoors, teak is considered extremely long-lived, and it has been used throughout Southeast Asia for construction and important carvings for hundreds of years.

T. grandis is used for ships, bridges, railways, construction, pilings, plywood, furniture and cabinets. It is also used for its medicinal properties in Southeast Asian medicine. Excessive exploitation of teak has significantly reduced the natural population. Plantations were established in and beyond its natural range since the 1800s and supply is now sustained through the expansion of teak plantations throughout the tropics. Teak is one of the most important tropical plantation species and is thought to cover almost 6 million hectares worldwide; teak production covers 1 percent of global annual timber demand. However, timber from plantation teak is considered less dense and resistant to rot and insects than teak from natural forests. This species has not been evaluated by the IUCN Red List.

Tectona grandis is increasingly rare in its natural range.

India is both the largest importer of teak, and the largest exporter of processed teak wood products. Vietnam is another major processing country, largely for outdoor furniture.