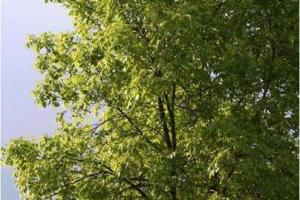 J. regia, a mid-sized tree, is native from southeast Europe to the Himalayas and north to central Russia. It has been introduced in western Europe as well, so that it has been extensively naturalized in France and the UK. Naturalization of the tree began early in many regions - it is thought to have been brought to western Europe by the Roman Empire. In the United States, J. regia is very widely planted, particularly in the state of California.

J. regia is best known as the source of the popular walnut nuts, which are the seed of the tree. Other Juglans species produce this nut as well, but those of J. regia are easiest to process. China and the state of California, U.S., are the world’s major exporters of these nuts. Walnut wood is highly prized for its rich, dark, heavy, fine-grained heartwood, used for musical instruments, high-end gunstocks, cabinets, furniture, flooring, veneer, and other applications.