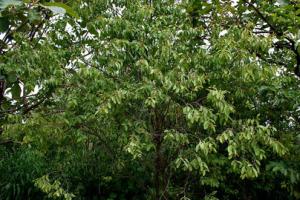 S. album, commonly known as Indian Sandalwood, is a dry deciduous forest species native to China, India, Indonesia, Australia, and the Philippines. This small tropical tree grows to 20m high with red wood and a variety of dark colors of bark (dark brown, reddish and dark grey). Because it is strong and durable, S. album is mostly harvested for its timber. Sandalwood heartwood, which is close-grained, is used for fine furniture and carving. The heartwood and roots also contain ‘sandal oil’ which is valued for use in perfumes, incense, cosmetics, soaps, and medicines. The bark contains tannin, which is used for dye.

Because S. album is highly valued in India and uncontrolled harvesting have cause populations to dwindle in recent years, India has imposed an export ban on Sandalwood and instated conservation measures to protect the species in the country. Sandalwood is now grown on plantations in Australia. Its IUCN Red List status is “vulnerable.”

India has placed an export ban on Sandalwood timber.